The Longest August – my review 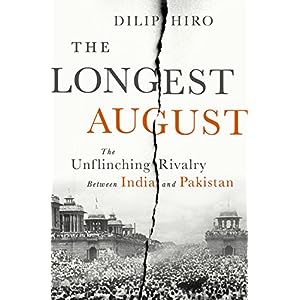 History is not science. This fact is so strongly forced upon the reader by Dilip Hiro that it cannot but color every aspect of the narrative you have in your hand.
“The Longest August” is a catchy title and promises a cold, hard look at the origins and development of one of the trickiest and most dangerous national rivalries in the world today, The question that is the India-Pakistan enmity is fraught with as many dangers to the person who attempts to answer it as the actual enmity holds for Asia and, indeed, the entire world. Passions run high on both sides of the Radcliffe line and words can be as explosive as, well, explosives.
It is this minefield that Hiro attempts to map out, and uses a mallet for a metal detector. The ambit of the book is wide. Starting from the latter decades of the nineteenth century and carrying on up to 2015. The work is comprehensive in that few events of note are missed out. From Jinnah’s early antipathy towards the Muslim League to the 1935 elections to the partition politics, the four wars, the different courses that the governments of the two countries ended up charting, the complex interplay of the ambitions and fears of the world’s superpowers, Kashmir, Afghanistan- there’s little that hasn’t met the author’s eye. From this viewpoint alone, the book is a great crash-course in recent South Asian history.
It’s the subjectiveness of the author that muddies the waters though. While taking care not to introduce himself into the narrative, Hiro is unable or unwilling to not let his bias shine through. His barely disguised disgust for Mahatma Gandhi, his dislike for Nehru and Patel, in fact for pretty much all of India is plain to see. It’s his use of adjectives that gives him away. If we are to believe his story unquestioningly then India as a nation is the villain of the whole piece. Surrounded by honest, well meaning neighbors, India’s mean-spiritedness, duality of voice, selfishness of character and sheer treachery are what have led to every war in the subcontinent, and led two nuclear nations to the brink of annihilation. Pakistan and China are unwillingly forced to do whatever they do throughout the period. And this is Hiro’s Achilles’ Heel.
I am, by no means, naive enough to believe that in all these regional conflicts the blame lies on one side alone. I realize both parties have played a part. The author, though, is almost unbelievably blind to this viewpoint.
I could go on about the biased commentary and the sheer one-sidedness of the narrative but I will end with three examples –
1. While India gets squarely blamed for 1962, Pakistan is not similarly treated for 1948, 1965, 1971 or 1999.
2. Pakistan’s support to Sikh militants through the 1980s is barely mentioned (even Kashmir is begrudgingly accepted), India’s support to Baluchi militants is highlighted time and again.
3. This is how Hiro describes the unveiling of Gandhi’s statue in Washington DC, “a bronze statue of the semi-naked, striding Mahatma, armed with a walking stick…”
Now you might think that I am biased against the author, being an Indian. I invite you to read the book and draw your own conclusions; it is still informative, if off-balance.

I need to fill this up with much better content than I had populated it with earlier. Why I write a blog maybe? I started blogging in 2009 or thereabouts. I was a newly turned atheist and wanted to converse with others of the same persuasion. We're not exactly a big population group in India! It didn't go very well and I sort of lost interest, posting a few things now and then. I got a lot more regular over the last few months and have been posting almost daily since February '15. There were many reasons why I gradually became more regular in posting, but one way or the other, here I am! So this blog has taken shape, being at different points in time my showcase, my comedy club, my art gallery, my book club, my therapist, my close friend, my innermost self....but always my little corner of the world. You are all welcome to visit and I hope you stay awhile! A few points about me because I don't want to lead anyone on(and trust me this does become an issue more often than I'd care to admit). I'm Indian, the brown-skinned variety; if race, ethnicity or skin colour is an issue, you don't have to get to know me any more than what you see on my blog. I'm 40, so if age is an issue, please be informed accordingly. I was a doctor, an ophthalmic surgeon for 10 years before I quit practice.
View all posts by hbhatnagar »
« Challenge Accepted #44
Six word story »

This site uses Akismet to reduce spam. Learn how your comment data is processed.